"...A piece many years in doing and now perfectly perform'd." 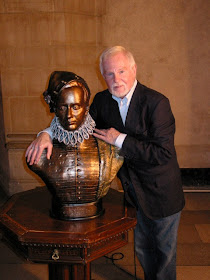 On Thursday night at the Riverside Church in Manhattan, I had the great pleasure and honor of helping present a noteworthy statute to Sir Derek Jacobi at a benefit fundraiser for the newly launched theatrical company The Ensemble Theatre Company of New York.
Jacobi is fresh off a widely acclaimed run as perhaps the greatest King Lear of our time -- one that brought him this spring to the Brooklyn Academy of Music. (He also serves as the narrator of this fall's Oxfordian feature film Anonymous.)
Thanks to some stealthy planning and gracious goodwill (see acknowledgments below), my co-conspirator Gerit Quealy and I had set beneath a concealing veil the very first ready-for-primetime Edward de Vere bust from the entrepreneur Ben August and sculptor Paula Slater. (The story of the de Vere bust was blogged about here and here.)
At the completion of the evening's program celebrating the legendary Shakespearean actor -- and longtime Oxfordian advocate -- we were generously allowed to include a surprise presentation of the de Vere bust to Jacobi.
The five-minute presentation featured Quealy, who'd originally conceived of bestowing the statue on Jacobi, recalling the recipient's peerless Prospero and Lear. She said in her experience as an actor, the finest practitioners of the craft are forever searching for new windows on the truth. My contribution concerned great artists being unafraid to take big and sometimes controversial risks. (I wrote the remarks beforehand but tossed it out the window almost completely when the moment came. The one thing preserved word-for-word, though, was a poignant and funny Bertrand Russell quote -- someone else's quip, yes, but it still gave this admitted fanboy a thrill to say something witty enough to make one of his heroes laugh out loud.)
Jacobi was surprised, touched and most grateful for a bust of the Bard that he could claim as "Shakespeare." 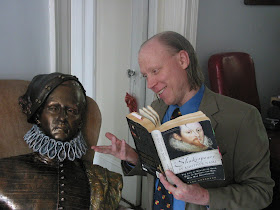 And just to ensure Jacobi's new sculpture was well-grounded in its heretical bona fides, an Oxfordian author did also give it a quick refresher course beforehand. (Pictured)
Jacobi, as modest in person as he is kind and unassuming, might never presume to give anyone a sense of the greatness he's achieved in his six decades on stage and on the big and small screen. (His Wikipedia and IMDB entries certainly give a sense.) But it's well worth closing on here. His bio, as the Company's publicity materials spell it out, is below.

Throughout the evening, Sir Derek will relate the highlights of his award winning career, from the early days at school with Sir Ian McKellan and Sir Trevor Nunn, his talents being recognized by Sir Laurence Olivier and becoming one of the founding members of the new National Theatre. Appearing opposite Peter O’Toole in “Hamlet”, and appearing with Olivier in his film versions of “Othello” and “The Three Sisters”.  His big breakthrough came in 1976 when he played the title role in the BBC production of “I, Claudius” a role that eventually won him the first of his two Emmy Awards.  Through his international popularity he toured worldwide playing Hamlet -- even being invited to essay the role at Kronborg Castle better known as Elsinore Castle -- and bringing his interpretation to television in 1980 in a BBC production.  Through the years he continued to blaze a trail of great roles and accolades on the stage in the US, England and around the world.  Jacobi won a Tony award for "Much Ado About Nothing" and starred in, among many other shows, Hugh Whitemore’s "Breaking the Code."  In film his career continues through Kenneth Branagh’s "Henry V," "Hamlet" (as King Claudius this time), “Dead Again,” “Gladiator," and more recently as the Archbishop of Canterbury Cosmo Lang in "The King's Speech."

As an historian, he has been involved with the Shakespeare authorship question, supporting the Oxfordian Theory that the works of Shakespeare were written by Edward de Vere,  17th Earl of Oxford.  He has delivered public talks on the subject and with fellow actor Mark Rylance has signed a "Declaration of Reasonable Doubt" to encourage new research into the question. The online document has been signed by over 1900 people including over 330 academics. He has also narrated the forthcoming Oxfordian film "Anonymous."

(A heartfelt thank you to those without whom the sub rosa statue presentation would not have been possible: Ben August, Gerit Quealy, Anna Savant, Craig Dudley, Kevin Shinnick, Christopher Clawson, The Ensemble Theatre Company of New York and of course Sir Derek Jacobi!)
(Photos by Mark Anderson (Jacobi with bust) and Gerit Quealy (scribbler with bust))
Mark at 1:10 AM
Share